What Leads to Ramapo Football Coach Drew Gibbs’ Cause of Death

With a heavy heart, we have to inform Ramapo football coach Mr. Gibbs’ passing on November 16, 2021, breaking many hearts, including his beloved ones. Drew Gibbs’ cause of death will be discussed below, but first, learn a little more about the coach.

Mr. Gibbs, as you may already know, was the head football coach for the Kean University Cougars in Union, New Jersey. He compiled a record of 3–7 in his lone season as head coach.

Since 2001, he had been the Green Raiders coach, leading players to seven sectional titles. Not mentioning that he boasts connections nationwide, and former NFL star wide receiver Chris Hogan is among his alumni.

He was recently working as the head coach at Ramapo High School in New Jersey. He had some key phrases, including “Nuts” and “Hunt or be Hunted.” 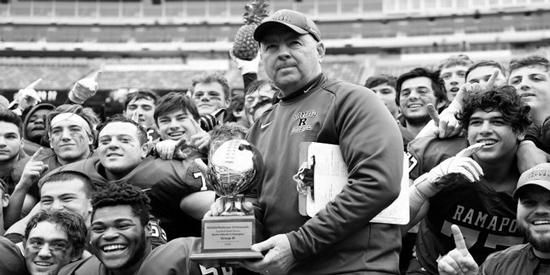 Mr. Gibbs had been successful for so long, serving at Ramapo as they have only failed to make the playoffs once in his 17-year career as he later became one of the best high school football coaches in the state of New Jersey.

According to sources, Mr. Gibbs had a career record of 183-51 as a head coach at Ramapo, along with more than four decades of coaching experience.

Following the 2019 season, he was later considered as State Coach of the Year by NJ.com, when his team completed its second straight 13-0 season.

The Bergen County school’s win streak got to 27 in a row before losing to River Dell in last season’s COVID-shortened season. Noted, the 2019 Ramapo team rattled off another 13 wins in a row and beat Parsippany Hills in its MetLife finale.

Another Heartfelt Story Has Been Shared As Well About Etel Adnan’s Sudden Death at the Age of 96 Breaks Hearts. You May Also Want to Visit The US Celebrities Death News Section For More Related Articles.

Reality Behind Drew Gibbs’ Cause of Death

The heartfelt News came out along with many condolences and kind words on social media. Drew Gibbs’ cause of death was shared and confirmed by his family.

He sadly passed away at the age of 59. The younger Gibbs tribute: “I was lucky to call him dad, but he had 500 sons. The outpouring of love is incredible. People should know how loved he was.”

Close sources said he had chest pains at practice, so he was sent to the hospital. He fought for his life and underwent surgery to fix a tear in his aortic valve, as it’s reported.

Mr. Gibbs was rushed to Valley Hospital in Ridgewood Monday night. Surgery was expected to take eight to 10 hours. It’s shared that doctors found the tear following a CT scan.

Later on, The school shared the tragic news via an email to the students, informing them of Gibbs’ passing as he passed away of aortic dissection complications and surgery complications.

Danielle McCartan tweeted: “Praying, this morning, for a former long-time colleague in Drew Gibbs and his family. One of the best HS football minds in NJ. Ramapo football coach rushed to hospital following practice emergency, fighting for his life – http://nj.com.”

Pal Park AD wrote: “Absolutely no words can explain the impact of Drew Gibbs on so many lives. He practiced what he preached – a tremendous father, husband, friend, teacher, coach. Prayers to the Gibbs family; we are all with you.”

One announced: “Terrible news- “Drew Gibbs had a heart attack at practice yesterday and passed away last night.” Drew was a great coach and an amazing man. So sad. Thoughts and prayers to Gibbs family and a Ramapo community.”

Art Stapleton tweeted: “Just awful news for the Gibbs family and all those who know him. Great coach. Great man. One of the best I’ve ever covered. Rest in peace, Drew. Stunning. Heavy hearts across North Jersey this morning.”

Another replied: “Stunned. I’ve known so many folks in the @RamapoAthletics family for so long… Coach Gibbs was one of the best. Very sad to hear this news today & will continue to pray for the Gibbs family #RIP.”

Pat Lanni shared: “@RamapoFootball coach Drew Gibbs is undergoing surgery and fighting for his life. From his son @CoachBrianGibbs: “Send good vibes. Send prayers. Whatever it is you do, do it tonight.”

One wrote: “The Oakland Recreation Commission like everyone in the FLOW area is devastated after hearing about the tragic passing of legendary coach Drew Gibbs. Our thoughts and prayers are with his family, his players, and the entire RIH district.”

Pat Lanni took it to his Twitter: “Devastating news to report for the #NJFootball community. Drew Gibbs died this morning following emergency surgery. He was 59 and a leading voice for the sport. His program’s success spoke for itself.”

A fan commented: “Sending thoughts and prayers to the Gibbs family and @RamapoFootball program. Coach Drew Gibbs was one helluva coach but an even better person… the New Jersey coaching world lost a great one today.”

Robert Aitken Jr. expressed as well: “Ramapo was my first game since the start of the pandemic. “People were in the stands and just to see the officials again, guys I haven’t seen in a year, it’s just great to be back to doing what we love to do.” – Drew Gibbs. He loved people. He loved football. RIP, coach.”

More Articles:
Keyshia Cole’s Father’s Death Cause After Being Hospitalized
Real Story Behind Heath Freeman’s Cause of Death at 41

Tags:
Previous Article
MLB Jerry Johnson’s Cause of Death at 77 Confirmed by his Wife
Next Article
Keyshia Cole’s Father’s Death Cause After Being Hospitalized