Reality of Sportscaster Ernie Johnson’s Son’s Cause of Death

The tragic story has been shared by Ernie Johnson himself, sharing the news on his social media; however, no reliable sources nor more details have yet been published due to the subject.

As you may know, Mr. Johnson Jr. is a well-known sportscaster for Turner Sports, currently playing his role as the lead television voice for Major League Baseball on TBS, hosts Inside the NBA for TNT and NBA TV. 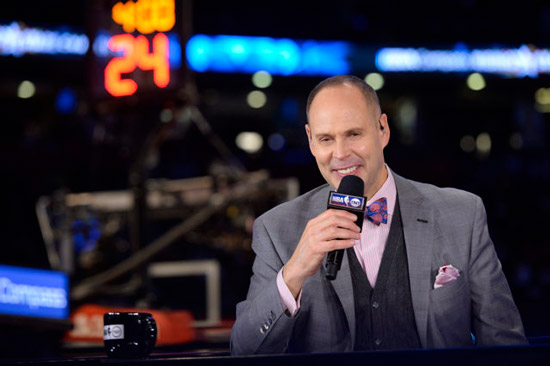 For Turner and CBS Sports, he has contributed to the joint coverage of the NCAA Division I Men’s Basketball Tournament. His father, Ernie Johnson Sr., used to be a Major League Baseball pitcher besides being an Atlanta Braves play-by-play announcer.

It’s said that after learning about the country’s abundance of orphaned children, Mr. Johnson informed his wife Cheryl of traveling to Romania in 1991, in Johnson’s 2017 memoir.

Later on, accidentally, she met a three-year-old child named Michael, abandoned in a park at birth, who couldn’t walk or speak. Cheryl informed her husband about the boy over the phone, and he answered: “Bring him home.”

Another heartfelt story has been shared as well, announcing Actor Octavio Ocaña’s Cause of Death which was due to a terrible accident. You may also want to visit the US Celebrities Death News section for more related articles.

What Is Ernie Johnson’s Son’s Cause of Death

The heartfelt news has been shared through social media, announcing Micheal’s death. Nothing has been shared yet, clarifying Ernie Johnson’s son’s cause of death; however, we know Micheal suffered from a particular disease.

Later, along with a statement, more details were shared, saying he passed away earlier Friday at age 33: “We are heartbroken over the passing of Cherly and Ernie’s beloved son, Michael, a true hero who uplifted and brought joy to everyone he touched.”

The statement says: “The family’s love, faith, and commitment to one another will forever be an inspiration to us. Our deepest condolences are with Cheryl, Ernie, and their family, friends, and loved ones as we mourn with them.”

According to sources, during one trip to the doctor, Michael was diagnosed with Duchenne muscular dystrophy. The couple was heartbroken after hearing the news, although the abandoned little boy in Romania deserved a second chance.

According to an article, DMD is one of four conditions known as dystrophinopathies. The beloved Michael had suffered from the deadly disease for most of his life.

The lovely boy’s first years in the US were spent under health cares from doctors as he was taught the basics of life from scratch and eventually made progress.

Mr. Johnson announced the heartfelt news: “We are grieving and at the same time so grateful for having been witnesses to a miraculous 33 years with Michael.”

Following Mr. Johnon’s statements due to COVID-19, since 2011, Micheal had required permanent use of a ventilator to breathe as he was diagnosed with lung infections multiple times. Contracting with COVID-19 could have risked his life.

Not risking his son’s life, Mr. Johnson planned not to commentate on the charity golf game which was held between Tiger Woods, Peyton Manning, Phil Mickelson, and Tom Brady.

He explained, he would have loved to have been part of the broadcast team down there at Medalist, although it wasn’t worth the risk of bringing in an unseen foe into their house.

Noted, the sportscaster was diagnosed with non-Hodgkin’s lymphoma; however, that didn’t stop him from working while he began treatment. Johnson missed TNT’s coverage of the British Open and PGA Championship, the last two major golf tournaments in 2006 due to his cancer.

Do you have more details due to the tragic news? Do you know him or have close relations? Please help us to write a better, more reliable article by sharing your information with us.

Many have been commenting under Ernie’s post, sharing their condolences to the couple. MDA USA wrote: “On behalf of all of us at MDA, we are so very sorry for your loss. His life brought so much joy & hope to so many people. Your family’s love for him was & will always be the definition of what family means. We are grateful to have known him & his memory is a blessing to us all.”

A fan tweeted: “So sorry for your loss of one of God’s Angels. My family and I have been blessed with our daughter, a total care adult- at the age of 30 in January. She was only supposed to live till ten or younger, but GOD had a different plan!!! She has so blessed our lives. Take care, EJ..”

Ian Cull commented: “You and your family have inspired us all. We see the true meaning of fatherhood, strength, and love through your words and actions. Thank you for sharing your life’s story with the world, Ernie. I’m so sorry for your loss.”

One said: “Ernie, I can’t believe it. I was thinking of you watching the Braves host their first World Series game in 22 yrs and thought you’d be there. Reading Unscripted, I can only imagine how much Michael meant to you and his story. Prayers to you and your family.”

A follower replied: “Ernie, I’m so sorry for your loss. I’ve never felt more of a connection to a book as I did to Unscripted. It changed my life, and I’m forever grateful. You and Michael were both lucky to have each other. I don’t know what to say other than I’m very sorry for your loss.”

One announced: “Prayers go out to Ernie Johnson and his family for the loss of their son. E60 did a tremendous profile on Ernie & Michael a few years back that everyone should carve out some time to watch https://espn.com/espnplus/player/_/id/a7eca308-dde3-4bf3-a788-6c278b52d8b8.”

One shared: “Can’t imagine of a better family unit for Michael, and I’m sure he felt the same about the family that provided him the unconditional love to enjoy these 33 years. Condolences, and sending strength to you and your family, brother.”

Another expressed: “Love is forever, Ernie. That young man was so blessed to come into your family. You and your wife have a humanity that is inspiring and appreciated. You gave each other such a gift and the world a beautiful gift by sharing your story. Thank you.”