With a heavy heart, we have to inform you that another great musician has sadly left us on March 8, 2022. Heartbreaking news has brought sadness to many. Stay with us to read more about Grandpa Elliott’s death, his personal life, and his career.

Born on July 10, 1944, Grandpa Elliott Small, who is known as Uncle Remus too, is a veteran street-musician in New Orleans, Louisiana, United States. Mr. Elliotts played the harmonica besides singing.

Grandpa Elliott was considered to be a street icon in New Orleans. Mr. Small made his way to become a soul singer in local clubs as a young man, who later recorded singles with arranger Wardell Quezergue.

Some of the records are available on Malaco and Tuff City Records compilations of New Orleans funk. His family relocated to New York City, where he took his first steps as a professional entertainer in the early ’60s.

Once again in between regular gigs, he was able to play on the streets, such as a role in a stage revival of Show Boat. It later leads the Louisiana vocal group The Dixie Cups to go up to New York.

Mr. Elliott had become dissatisfied with life in New York by the ’80s, which was considered to be the grueling schedule of performing in local clubs and on the road, and the music business in general at that time.

According to sources, bad decisions, as well as unfair contracts, had soured him in the industry. It’s said that he signed away the rights to one of his songs when the sight in his good eye started to go and everything got fuzzy.

He commented: “It was to a guy I had taken a liking to, a guy I trusted.” After a while, he moved back to New Orleans for taking his music to the streets, where it would belong only to him and to the passersby who heard it.

What We Know about Grandpa Elliott’s Death

Although not a lot has been shared due to Grandpa Elliott’s death, it’s stated that he sadly passed away at the age of 77/78. May he rest easy in grace and love.

Due to a skin infection, Mr. Elliott had been checked into the hospital more than a month ago that spread to the bloodstream. According to his son, Jay Small he passed away from the infection early Tuesday morning.

“I know that my Father would want me to reach out to the people that He loved so much, thank all of you on behalf of the one and only, Grandpa Elliott Small.”

It’s also shared that the talented musician’s eyesight began to fail and he became blind more than a decade ago; however, he continued playing on French Quarter streets before the pandemic paused the music.

The Latest:
Health Issues Leads To Musician Ron Miles’ Cause of Death

Playing For Change announced: “We’re deeply heartbroken to announce that our beloved #GrandpaElliott passed away last night in New Orleans. We thank Grandpa for all the valuable lessons and for sharing his gift of music with the world, bringing so much joy to all of our hearts. Your legacy will live forever!”

One tweeted: “New Orleans musician and French Quarter mainstay Grandpa Elliott passed this morning, his family announced. He was a well-known figure to both locals & tourists. WWOZ sends our best wishes to his family & many friends at this difficult time.” 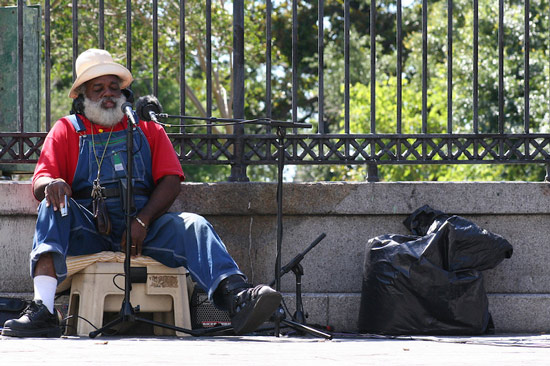 Heather Elizabeth shared: “I can confirm Grandpa Elliot has passed. RIP sweet wonderful man. I loved him. When I lived in the Qtr we had some good visits. So talented. A New Orleans Icon for sure. You will be missed, Grandpa!! #nola#neworleans”

Heather added: “When I lived in the Qtr, it started to rain one day. He sang, “You are my Sunshine” as he and I stood alone underneath a gallery on Royal St. Then, the sun came out 🌞 I was tearing up as he sang to me. We had some great conversations. He was an amazing man!!”

She wrote: “To hear Grandpa sing, “Old Man River” was one of the most moving things I had ever heard. I am grateful that I knew him and was able to hear his beautiful, deep voice. RIP Grandpa. We will miss you!!”

Karen DaltonBeninato expressed: “RIP to New Orleans street musician Elliott Small, a/k/a Grandpa Elliott. He performed his single “I’m a Devil” (produced by Wardell Quezergue) in a devil suit with horns and a pitchfork. Don’t know what this fancy dancing clip is from, but dang.”