Heartbreaking Story Behind Tom Hannegan’s Cause of Death

Many condolences have been shared, announcing that one of the fiercest champions for #LGBTQ equality has passed away on October 20, 2021. Tom Hannegan’s cause of death has been shared. Stay to learn more.

First of all, it needs to be mentioned that no reliable sources have neither shared nor confirmed the tragic news yet; however, Tom Hannegan’s death has been tweeted by many, confirming his death on social media.

It’s said that Mr. Hannegan had served as publisher and editor-in-chief of Street Scape Magazine, as well as an associate broker with Hannegan Real Estate & Construction LLC, a family-owned business.

As you may already know, in November 2016, he was elected to his first two-year term to represent the 65th House District encompassing the northern part of the county. 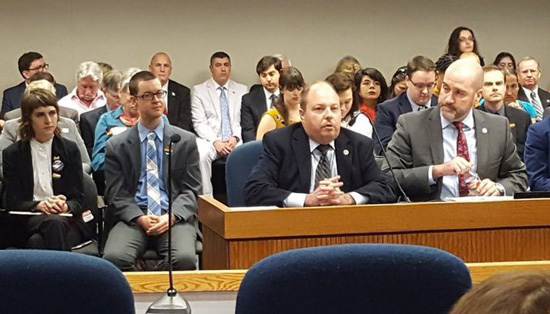 In 1988, he graduated from Duchesne High School, received his bachelor’s from Lindenwood College almost four years later, and in 1998 achieved his Master of Science in Human Resources from Lindenwood University.

Noted, the beloved Hannegan considers as one of few openly gay Missouri lawmakers who advocated for criminal justice reform and human rights, proposing a ban on discrimination against lesbian, gay, bisexual, and transgender people.

Based on Rep. Bruce DeGroot‘s tribute, Thomas P. Hannegan was one of the most genuine people. He was faithful to himself and treated everyone he met with respect and dignity.

He’s been referred to as a statesman. Mr. DeGroot expressed: “Most important to me, Thomas P. Hannegan was my friend. He will be sorely missed by the General Assembly.”

Hannegan’s campaign treasurer, Scott Mell, announced: “The community has suffered a great loss.” Unfortunatly, he passed away at the age of 51.

Story Behind Tom Hannegan’s Cause of Death

Tom Hannegan’s cause of death has been shared due to a stroke. According to his campaign treasurer, he suffered a stroke on Wednesday morning and sadly passed away at about noon.

Republican House leaders tribute: “Tom will forever be remembered for his determination to serve those in need, as well as his great love for all people. We extend our thoughts and prayers to the many friends and family who loved Tom. He will be greatly missed.”

Friends and co-workers have immediately begun writing kind and emotional messages of prayers and solidarity for family and friends showing.

One wrote: “TomHannegan was my GOP colleague, a fellow openly gay legislator, and mostly, my friend. Tom was thoughtful and quiet. But in certain moments, he was the life of the party – funny, silly, and full of joy. I’ll keep flying that flag for you…and I’ll miss you, friend.”

Kendall Kani Martinez-Wright tweeted: “My heart is hurting! TomHannegan words can not describe how I cherished our friendship. I will deeply miss visiting you in your office in the Capitol. Love you, buddy, and fly high, Representative. #MoLeg.”

Kaitlyn Schallhorn shared: “House leadership says Rep. TomHannegan “will be remembered for his determination to serve those in need as well as his great love for all people.” #moleg.”

Another said: “We are saddened to hear about Rep. Tom Hannegan’s passing. He was a very kind man and was a wonderful advocate on behalf of the Missouri Non-Discrimination Act. May his memory be a blessing.”

Missourians for Alternatives to the Death Penalty announced: “We are deeply saddened at the loss of Rep. @TomHannegan who for years championed a bill that would further Severe Mental Illness #SMI Exemptions for those facing the #DeathPenalty. He was fearless in his advocacy for all people in #Missouri and will be greatly missed.”

May he rest in peace and be remembered fondly. Please write your condolence for us as it will be the only thing to get his beloveds through such difficult times.

More Articles:
Does Dennis Hutchings’ Heart Attack Lead to his Death at 80?
Real Story Behind Christopher Ayres’ Cause of Death at 56