A Man Killed Masked Teens During Stand Your Ground Case

A Georgia man killed 3 masked teens when boys were trying to rob his home what authorities have named as a likely ‘stand your ground case’ around 4 a.m. Monday in Conyers according to reports.

based on reports on of masked teens started to shot at three residents before the homeowner returned fire.

“The victims of the attempted robbery were all uninjured, but the three attempted robbery suspects were all shot during the exchange of gunfire and succumbed to their injuries, one on scene and two at a local hospital after being transported,” the Rockdale County Sheriff’s Office announced.

“It was five shots and then it sounded like a handgun. Then I heard somebody have an assault rifle. And it was a slew of shots that came out,” stated one of the next-door-neighbor.

A report of Stand Your Ground Case

Nevertheless, One neighbor reported he heard someone requesting help.“I heard a guy yelling for help. ‘Help me help me, I’m dying, I’m dying, help me, help me,” Brian Jenkins said the police.

Another one told they ran out to help after they heard what sounded like five shots from a gun.“Then I heard somebody have an assault rifle,” Carlos Watson added. “And it was a slew of shots that came out.”

According to what witnesses said and other evidence, the investigators believe that one of the boys first started shooting and then the homeowner returned fire in response. In fact, the man exchanged gunfire with the intruders and killed masked teens.
“It was a lot of shots, and it was back and forth,” said Carlos Watson. “You could tell it wasn’t just one person shooting.”

Based on what police said, 16-year-old Isaiah Reid and Jaime Hernandez, 15, were using masks on their faces during a homeowner in Conyers began shooting on the siblings and their unknown 16-year-old friend after being shot at. 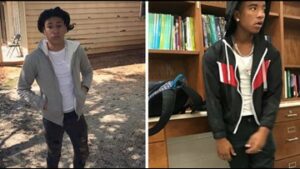 However, Rockdale County sheriff’s agent Lee Thomas stated in a press statement that Reid, Hernandez, and their suspected associate approached a residence on White Oak Court all wearing masks, and tried to rob three individuals in the front yard. Also, as we know the man who shot and killed the masked teens lived at the residence with his mother.

Man killed masked boys; it could be a ‘stand your ground’ case

“It could be a’ “stand your ground’ type case, based on the preliminary (information) that we have learned so far,” declared Sheriff Eric Levett, as we believe in it too.

Georgia is one of at least 10 states with self-defense laws that include language stating a person may “stand his or her ground,” according to the National Conference of State Legislatures.

Under the ‘stand your ground’ doctrine, people worrying about their lives can use fatal force without having to retreat from a confrontation, even when it is probable.

The statute was central to George Zimmerman’s defense in a case that captivated the US during much of 2012 because police originally refused to capture him based on his self-defense argument and ‘stand your ground’ right in Florida law.

Stand your ground laws allow people to respond to threats or force without fear of criminal prosecution. Georgia Code states that “a person is justified in using force which is intended or likely to cause death or great bodily harm only if he or she reasonably believes that such force is necessary to prevent death or great bodily injury to himself or herself or a third person or to prevent the commission of a forcible felony. ”

Though any charges have been filed against anyone at this time, police said that the research continues, according to the sheriff’s department.

More like this:
Oklahoma Teen Girl Arrested For Plan to A School Shooting
Alabama teen killed his family members at a home in Elkmont
Ohio gamer sentenced to prison for a deadly ‘swatting’ case

At Least 13 Injured in a Shooting in Bogalusa Louisiana
A Goudarzi May 17, 2020

At Least 13 Injured in a Shooting in Bogalusa Louisiana