The young officer, who’s been with the Daytona Beach Police Department for about three years, was transported to Halifax Health in grave condition after being shot in the head while on patrol in Daytona Beach at the end of June.

He had been in critical condition for about a month following his surgery until Tuesday, when officials sadly announced he lost his life due to his gunshot wound to the head.

The tragic news has been released by Chief Jakari Young in a statement on Twitter, reading, “Today is an extremely difficult day for the Daytona Beach Police Department and the City of Daytona Beach. It is with an extremely heavy heart that I inform everyone that our beloved brother, Officer Jason Raynor, has passed away with his immediate family by his side.”

The statement added, “The outpouring of love and support that all of you have shown to our police department and to Officer Raynor’s family since he was severely injured has been nothing short of amazing. In His infinite wisdom, God decided that it was time for this courageous young man to guard the gates of Heaven, even though that wasn’t the outcome that we all hoped for.”

Jakari Young continued, “Now more than ever, we ask for all of you to embrace the Raynor family and the Daytona Beach Police Department in your hearts during this devastating time and pray that God will give us all the strength to persevere through this senseless tragedy. Chief Jakari Young Chief’s Statement On The Passing Of Officer Jason Raynor Jason’s sacrifice will NEVER be forgotten…”

Latitude Margaritaville Resort in Daytona Beach announced on Thursday they’ve raised another $4,500 for Officer Jason Raynor when he was still hospitalized. His family had said he is showing some signs of improvement; however, there have been some setbacks.

Another fundraiser for Officer Raynor was held on Friday. It was at the Daytona Beach Area Association of Realtors starting at 10 a.m. Friday and above than 30 sponsors raffled off prizes. 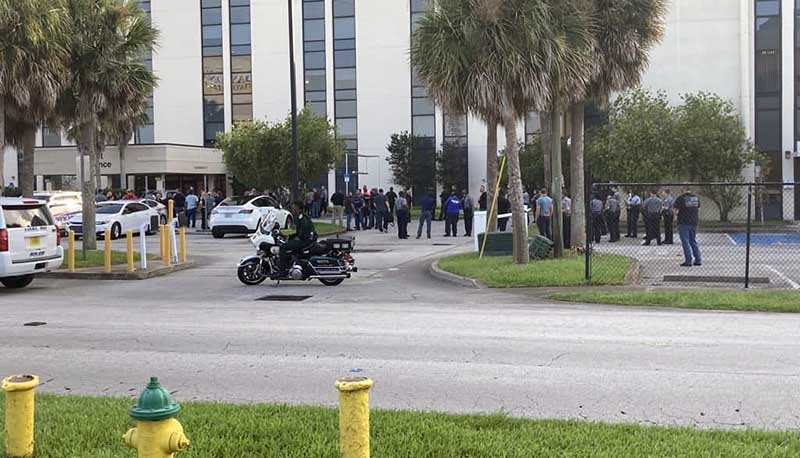 Raynor took his last breath at 8:09 p.m. on Tuesday while his heartbroken family was by his side.

Where is the Suspect who Killed Jason Raynor?

Our thoughts and prayers are with Jason Raynor’s family, friends, colleagues, and all of his loved ones on these tough days. You can also leave a condolence message below the comment box to honor him.

Also, a manhunt for the suspect, Othal Wallace, went public, with Wallace finally being tracked down in Georgia days later. Wallace fled custody and was found hiding in a treehouse near Atlanta, according to officials.

He has since been deported back to Volusia County and has faced a judge who found probable reason to have him charged with the attempted murder of a law enforcement officer. He is in custody without bond now.

Do you have a story to tell? Please kindly scroll down to get in touch with us within the comment box. You can also follow more US daily crimes in the Crime section.

Soon after the heartbreaking news was released, many of beloved Jason Raynor friends and colleagues expressed their sadness on social media by posting their tributes:

Someone wrote, “It’s so so sad to see this happen to our police officer #JasonRaynor. My thought and prayers are with his family and friends and all of Volusia County Family and Friends. Thank you for your services. R. I.P Jason Raynor. God have taken another angle home this evening.”

Another said, “Very very very sad!! He was in the room next to my beat friend who was in bad shape as well and I stopped and asked how he was doing every time I went to see my friend. I am sorry for your loss and I hope justice will be served when it’s time to sentence the person responsible.”

A user tweeted, “God bless him and his family. God bless the Daytona Police and all first responders who risk their lives every day for complete strangers. We have a career that gives us a split second to make a decision. Right or wrong, we are humans with families. I pray every day for police.”

Also one announced, “MY Heart is Broken. Only God knows why this tragedy had to happen. Please give my love to the Raynor Family n the DBPD. Being recently Retired frm OBPD n I’m a Mother of a LEO who currently is working in a PD Agency right outside of Chgo IL- I Stand Strong with Jason’s Mother.”

Police Chief Charles Moose Passed Away at the Age of 68
Shahrzad November 26, 2021

Police Chief Charles Moose Passed Away at the Age of 68