Oklahoma Teen Girl Arrested For Plan to A School Shooting

An 18-year-old Oklahoma teen girl was arrested for threatening to ‘shoot 400 people for fun’ at her previous high school, as Pittsburg County Sheriff’s Office arrest report. Things must have been so messed up that an eighteen-year-old teenager was have planned to kill so many people just for fun!

Anyway, Pittsburg County Sheriff’s Office police reported, Alexis Wilson bought an AK-47 and took pictures and videos of herself while she was holding the semi-automatic AK-47.

Monday, Alexis Wilson said to another worker who worked with him at a pizza restaurant that she had bought a gun and she is going to ‘shoot 400 people for fun’, and in so doing, she ruined her own plan and saved many lives because her two coworkers told to police that Wilson showed them photographs of herself while she was holding her gun and said she knows people at her former school, McAlester High School, that she would like to shot to them.

As Wilson said, he only tried to show his colleague that not everyone having a firearm is a bad person. She said police “she was just trying to teach her coworker not to be afraid of firearms,” but she could not explain why she used his former school name as a target for mass murder.

She also talked about her problems at school and the harassment she suffered there. She said she was bullied as she went to the school but was “always good about just ignoring it,” the affidavit said. Additionally, the teen girl said she was facing problems for re-enrolling at McAlester “due to previous incidents,” the affidavit added.

“She said that she would never shoot up a school or people and that her co-worker must have taken what she said wrong,” Deputy Matthew Jordan wrote in his report. 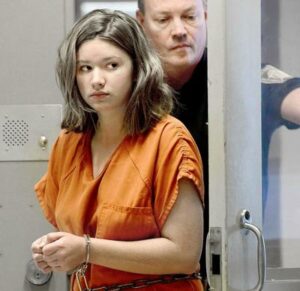 Though finally, Wilson stated Jordan she felt “suicidal and borderline homicidal” toward her classmates at McAlester High because of the harassment she suffered.

The AK-47 with six high-capacity magazines, an iPhone with a purple case, several rounds of ammunition, along with a 12-gauge shotgun founded in Wilson’s room when deputies went on to search Wilson’s home, with her mother’s permission. The mother told them she knew about her girl’s gun because her girl had been saving money to buy it.

This beautiful Oklahoma teen girl with brown hair and innocent face arrested and charged with crime terrorist hoax. She is being held on a $250,000 bond at the Pittsburg County prison and may face up to 10 years in jail.

“I am saddened that we live in a world where every threat could be credible,” Randy Hughes, superintendent of McAlester Public Schools, announced in a declaration after Wilson’s capture.

also thanked the deputies and other responding agencies in a video he posted to Facebook Monday.

“They had it under control before we knew anything about it,” he told.

Hughes declared that researchers believe Wilson was the only person involved in the alleged plot, and the district was not closing school Tuesday. More security would be on the high school campus.

He asked teachers and students to report any single thing that might seem suspicious. “If you overhear a conversation, if you see a post, or just see something that just doesn’t look right, report it,” Hughes told.

“We are living in scary times when we have to worry about the safety of our children in school,” he continued. “I can assure you that we’re going to do everything possible to make sure that our students are safe.”

Violence is increasing day by day and guns are available to everyone, even a teenage girl. Dark thoughts have also led to new shootings every day. But what if a teenage girl could easily think of killing 400 people for fun? The situation is very messed up if we can’t even trust a teenage girl with an innocent face.

More like this:
Alabama teen killed his family members at a home in Elkmont
Ohio gamer sentenced to prison for a deadly ‘swatting’ case

At Least 13 Injured in a Shooting in Bogalusa Louisiana
A Goudarzi May 17, 2020

At Least 13 Injured in a Shooting in Bogalusa Louisiana