Federal Reserve cut interest rates by 25 basis points to between 1.75% and 2% for the second time this year, as concerns about a potential global slowdown grow.

Interest rates do a lot to encourage spending and saving when rates go down, consumers are more inclined to spend rather than save, and add more money into the economy.

Therefore, when they meet, they sometimes determine to change the federal funds rate or the interest rate that banks charge each other for loans. This interest rate impacts on all the rest, for instance, when it’s cut, borrowing becomes cheaper and saving becomes less profitable to encourage spending.

However, Trump did not remain silent and reacted by hitting Fed chairman Jerome Powell for lacking “guts”. Trump has repeatedly criticized the Fed for lowering rates too slowly.

President Donald Trump, who has broken with presidential precedent and publicly pressed the Fed for months over rates tweeted in the minutes quickly after Federal Reserve Cut Rates: “Jay Powell and the Federal Reserve Fail Again. No “guts,” no sense, no vision! A terrible communicator!”

Jay Powell and the Federal Reserve Fail Again. No “guts,” no sense, no vision! A terrible communicator!

In an unusual move, the Fed’s own benchmark fed funds aim rate rose to 2.3% on Tuesday, above the target range set when it cut rates at its last meeting in July. The target range was since cut by a quarter-point Wednesday to 1.75% to 2% from 2 to 2.25%.

“This just doesn’t look good. You set your target. You’re the all-powerful Fed. You’re supposed to control it and you can’t on Fed day. It looks bad. This has been a tough run for Powell,” stated Michael Schumacher, director, rate strategy, at Wells Fargo.

There was disagreement over the decision, with three officials dissenting. Two — Boston Fed President Eric Rosengren and Kansas City Fed President Esther George — who have both told concerns that the US economy isn’t in requirement of an additional boost from rate cuts. But St. Louis Fed President James Bullard supported a deeper, half-point cut. 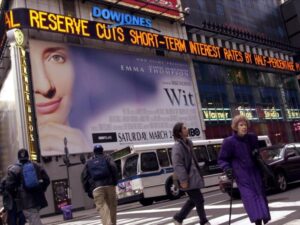 After years of steadily growing rates to reduce the rebound from the Great Recession, the Federal Reserve cut rates again between 1.75% to 2% through their September meeting on Wednesday. Nevertheless, this will be the second cut this year.

Policymakers forecast about the US economy

Policymakers now forecast the US economy will grow slightly more powerful than earlier anticipated, at a 2.2% rate, and unemployment will hold steady at 3.7%, according to their updated economic projections. In June, the Fed forecast that the economic increase for the year would stand at 2.1% with unemployment at 3.6%.

The Fed also agreed to lower the rate banks pay on excess assets to increase liquidity in other short-term lending markets. The Fed injected liquidity into the overnight lending market two days in a row after rates spiked.

Just because you probably don’t see the return on your savings account or CDs doesn’t mean to stop putting the money in.“You need savings for unplanned expenses no matter what,” McBride said. “In fact, if interest rates are falling, I’d argue that’s even more of an incentive to boost your savings.

Because if the economy rolls over, you want to make sure that you’ve got plenty of money saved.” He continues that periods of lower interest rates might be an excellent time to look into paying down high-interest debt or refinancing student loans. “There’s an opportunity to shop around and make sure you’re getting the best deal,” McBride said.

But for those looking to buy a car, take out a loan or take out a line of credit at home, lower rates make it a great time to do so.

More like this:
Fed Rate Cut, Oil Rises While U.S. Crude Stocks Fall
Majority in new poll says 2020 recession is likely in the next year

Unexpected Rise in the US Consumer Confidence Index in May!
Donya H May 26, 2020

US Stock Market Futures Fall while Reopening
A Goudarzi May 11, 2020

Man Shot and Killed After Stabbing Police Dog in Fullerton
Donya H May 28, 2020

Unexpected Rise in the US Consumer Confidence Index in May!

Private Payrolls: US Job Loss for Over 20 Million